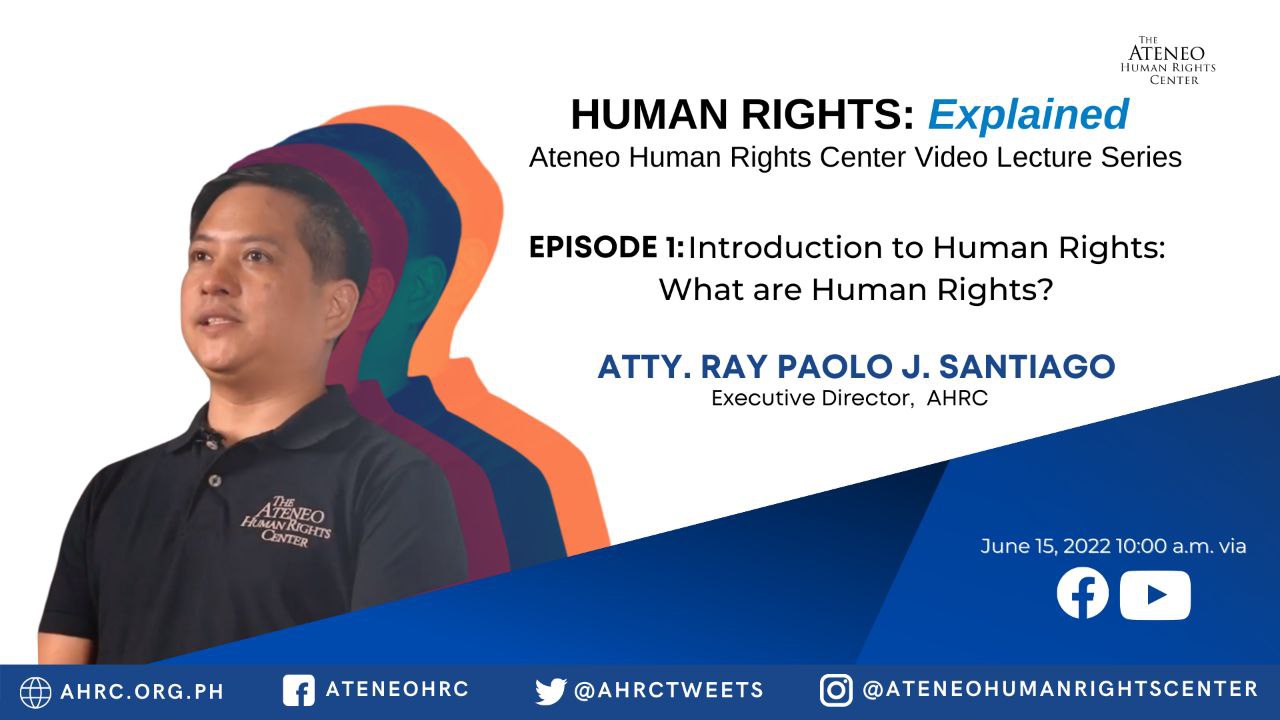 The Ateneo Human Rights Center (AHRC) is set to release this June 2022 a series of pre-recorded lecture videos that tackle different aspects of human rights–from its basic concepts to some of the most talked about–or maybe less explored–areas of human rights. Legal experts and practitioners were invited to discuss various human rights related issues and topics on cam.

Much has been said about human rights issues. It has been a popular focal point of so many conversations and even conferences across the world. But to some extent, it has become a hard to process concept for the most vulnerable populations. Not because they don’t recognize basic human rights but because some of its concepts remain complicated and hard to understand for them. Many human rights advocates and organizations, including the Ateneo Human Rights Center, recognize the need to simplify these complex concepts to make it more digestible for the general public.

The “Human Rights: Explained Video Lecture Series” of AHRC is aimed at bringing human rights concepts into the agenda of the general public by presenting them mobile, easy-to-understand, and laymanized lectures on various human rights topics. Additionally, the series is a collection of short lectures that are also designed to elicit students’ interest and normalize conversations on human rights and recognize its great impact on our daily lives.

Atty. Marianne Carmel Agunoy, Program Manager at the Ateneo Human Rights Center and the proponent of this project emphasized the need for such explainer videos about human rights. “Human rights are often seen as a floating concept – sometimes an ideal, and sometimes, even vilified. By better acquainting ourselves with the concepts, laws, and reality, we can be better human rights advocates,” she said.

AHRC took inspiration from the Ateneo de Manila University’s Magisterial lectures for this particular project. In the said magisterial lectures, legal practitioners and lawyers who have spent many years of working with various sectors in advancing human rights were invited to share not only theoretical principles but also their own account of personal experiences working with these sectors vis-a-vis human rights.

Targeting the general public, especially the students and the youth, Atty. Agunoy also shared what the AHRC wishes to achieve in its “Human Rights: Explained Video Lecture Series.”

“AHRC has long been witness to the power of the youth in effecting change. Through this production, we hope to engage more students (both undergrad and law students) in the advocacy for human rights. We are also inspired by the new found activism of the youth today and hopefully, this resource can help in further strengthening their knowledge and skills in the field of human rights and the law,” Atty. Agunoy stressed.

Additionally, AHRC, through these lecture series, also wishes to tackle and address some present societal issues including disinformation and the plight of the most vulnerable sectors including but not limited to children, women, persons deprived of liberty, and indigenous people.

“Human rights have been heavily maligned in recent years. Through these materials, we hope to facilitate better understanding of what it means and for who it’s for. We also want to introduce the plight of the most vulnerable sectors including children, women, PDLs, and IPs, and what we can do to support them,” Atty Agunoy added.

For questions and/or clarifications, please contact RJ Sangcap, AHRC Communications Officer at rmsangcap@ateneo.edu or email us at ahrc.law@ateneo.edu.